I didn’t see that many great movies in the theater this year.  Part of this was due to living in a town with a sticky, smelly theater that wouldn’t show an independent or art film if their film license depended on it.  I loved “The Dark Knight”, “Burn After Reading” (proving once and for all that even “minor” Coen is better than 95% of what usually gets released from Hollywood’s bowels), and “Wall-E”, but I felt like I missed out on a lot by living in a small town.  I spent more time having movies sent to me by Netflix, usually watching two to four a week (in between episodes of “The Wire” and “Twin Peaks”).  Because I’m lazy.  Here are 10 that I enjoyed quite a lot (mostly documentaries and older foreign films), and recommend to anyone with eyeballs.  In no particular order:

Encounters at the End of the World 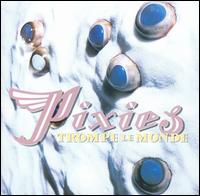 I know I’m putting myself in the minority by picking this over “Doolittle” or “Surfer Rosa” (totally ace albums, to be sure…and probably “better”), but for some reason this has always been my favorite Pixies record.  Some say they were running out of ideas, but to me it sounds like they went out in top form.  “Alec Eiffel” is one of the most thrilling songs in their impressive canon.  I’m sure I’ve listened to this song hundreds of times and I never get tired of it.  Frank Black/Black Francis sounds absolutely bonkers on 99% of the album, as if he’s receiving schizophrenic transmissions from all those UFOs he is so fascinated with.  Seriously, his weirdness was beginning to reach Roky Erickson levels of nuttiness, where before he was maybe just on par with David Byrne (haha).  “UMass” is one of the greatest sardonic songs about “intellectual” college students ever recorded (“We’re not just kids/to say the least/We got ideas/to us that’s dear/like Capitalist/like Communist/like lots of things/you’ve heard about/and redneckers/they get us pissed/and stupid stuff/it makes us shout…”).  Their fantastic cover of The Jesus and Mary Chain’s “Head On” seems tailor made for the Pixies’ noisy melodicism.  “Letter to Memphis” has some of the catchiest guitar riffs Joey Santiago ever played, as well as one hell of a vocal melody.  Damn the band if they didn’t follow this up with the arguable highlight of the album: “Bird Dream Of The Olympus Mons”, a subtle pop song that ascends heavenwards (or to Mars, I guess).  Fool the world.