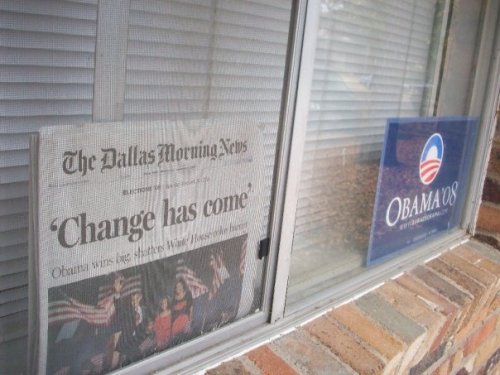 I was thirteen when the Supreme Court appointed George W. Bush the forty-third president of the United States. This was the same year I first wrapped my sweaty palms around Orwell’s 1984, as well as the only biography of Malcom X in the Madill Junior High library. It was also the year I discovered punk rock. More than the year of the “hanging chad,” or the world’s first teetering step into a new millennium, the year 2000 was especially pivotal for me in that it was the year during which I began to get an inkling of the kind of adult I would later become.

Since then, I’ve had a borderline obsessive infatuation with American politics. While it may have started in my bedroom, endlessly spinning The Subhumans’ The Day the Country Died on my first turntable and pretending that I knew something about injustice, this puny expression of small town frustration — symptomatic of the more troubling and increasingly undeniable sense that the way I was beginning to see the world was exponentially different from everything that I saw and heard from everyone around me — had come to be an indisputable fact of life. I’ve since read more, absorbed more, and learned why people like George Orwell, Malcom X and The Subhumans were so upset in the first place.

I was seventeen when John Kerry lost his 2004 bid for the presidency. Oh, how the times had changed. I had read Chomsky, gluttonously consumed every Dylan album my anemic movie-jerk paycheck would accommodate, and had spent weekends composing and distributing my own leaflets and reading lists outside the two movie theaters showing Fahrenheit 9/11. As I was four months away from being of legal voting age, the only exercisable option afforded me during the months leading up to the election was to  canvass door-to-door throughout the cultural backwash of South-Central Oklahoma. Back then, there was no quicker way to get a door slammed in your face than to utter the words “Hi, I’m Jezy Gray and I’m representing the John Kerry campaign.”

The election was as tough a loss for me as it was for most thoughtful Americans, but so far it had been the nature of the game: you work from the outside, from the fringes — and you lose. Always.

I don’t have to tell you that 2008 was a truly extraordinary year. Not because of the mind-boggling circus of a primary and general election, the surreal ecstasy of seeing the first black man elected President, the near-collapse of our entire financial framework, or the crushing disappointment that America’s first experiment with socialism in the 21st Century was the lobbing of money at corporate Goliaths  in order to see what would stick (surprisingly little, it turns out). What made 2008 so undeniably extraordinary is that it’s the first time — in my experience at least — that we won something big. As the handful of hours left in the Bush administration begin to pare closer and closer to oblivion, the reality of it all is becoming more and more electric. We won.

There are some people who will try to convince you otherwise. And when your TV set is perpetually looping images of vacuous celebrities spouting off empty buzz words like “change” and “hope,” chased with a two-hour special on how Obama takes his coffee, it’s easy to forget this simple, irrefutable fact: you won.  If the images from Abu Ghraib make you ashamed to live here, you won. If the last eight years have left you feeling bitter, defeated, hopeless — you won. If the sobering reality of living in the most violent, brutally aggressive superpower of this century leaves you feeling sick at your stomach, you won. If the war against the poor, against women, against homosexuals, against black people and brown people, against literacy and journalism — against rationality, in general — has made you regard the term “American idealism” as inherently laughable abstraction, then you’ve won something very real and very imporant.

Don’t let anyone take that away from you.

Posted in politics, Turn to the Left