In this age of diminishing print media sales, blogging has snowballed into an ever increasing alternate source of information.  It kind of horrifies me to think that people look to blogs for, like, real journalism.  If you want further proof that bloggers just don’t quite cut it as fully legit journalists, consider this: I had every intention of documenting last Friday’s Montu/Rad Shades/Digital Beatdown show in a semi-professional manner.  However, when it became clear that I wouldn’t be required to drive that night, all hope of sobriety (and good photography…and totally coherent thinking) gave way to gin & Sprite.  And goofy dance movez.

Digital Beatdown got things off to a good start, from what I saw, but I have to admit that I was preoccupied with getting my order taken at the bar.  And my other order.   Bartenders rarely recognize my beauty and always seem to take orders from girls in short skirts first.  Whatever.

Montu actually played two sets, broken up by an intermission patrolled by Rad Shade’s beat dropping.  Brother’s is not a huge venue, but every spare inch of space was filled with sweaty, grooving collegiate body parts.  Montu’s dexterous, intricate instrumental fusion seemed even more on-point than the last time I saw them.  My friend Colby Cowart happens to be their drummer, so maybe I’m not completely without bias, but this is a group well deserving of bigger and better things in the near future.  They already appear to have quite a local following, and for very legit reasons.

Rad Shades is the DJing duo Miles Compton and Will Krause, two other friends of mine.  Before the show they warned me that they had thrown the night’s mix together about an hour prior, but to my ears (and my shaking drunk ass), it was a tightly performed set.  The crowd was completely won over by their charismatic presence and solid mixing abilities.  Even when Will’s laptop crashed to the floor with an Apple-smashing thud, momentum was quickly regained (and said computer seemed to recover from the tumble).

Fortunately, our friend (and expert artist/photographer) Zay Shaeffer was there to pick up the visual slack, capturing some dope shots for you cats. 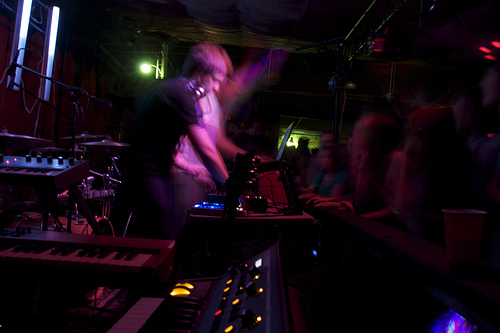 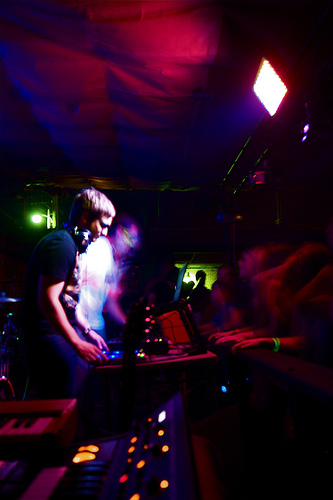 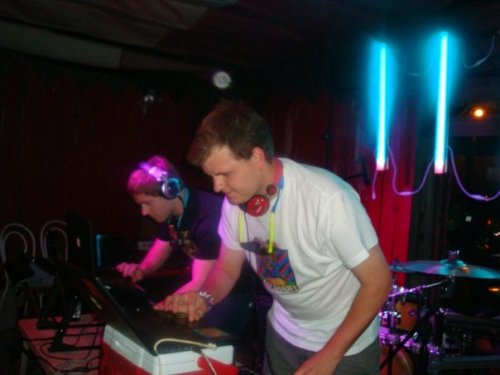 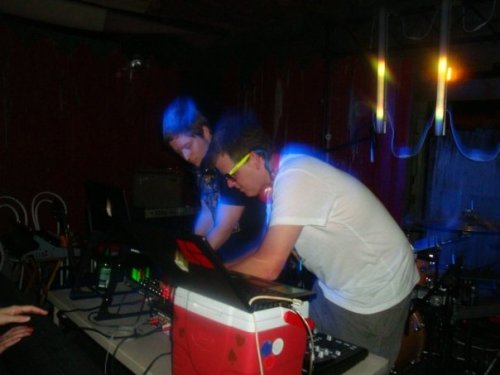 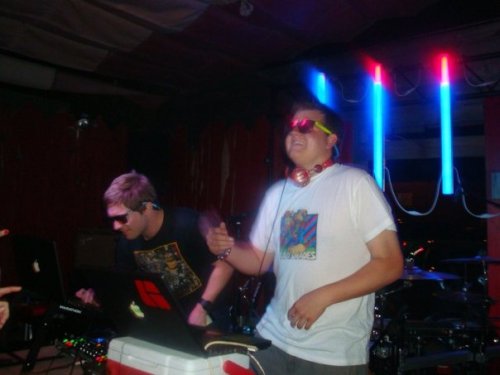 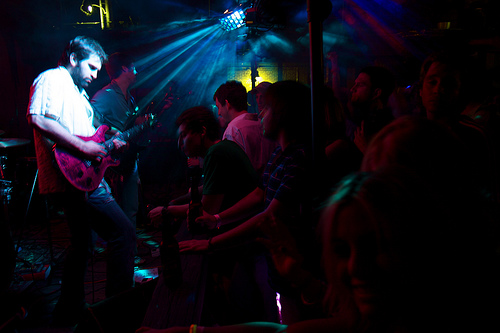 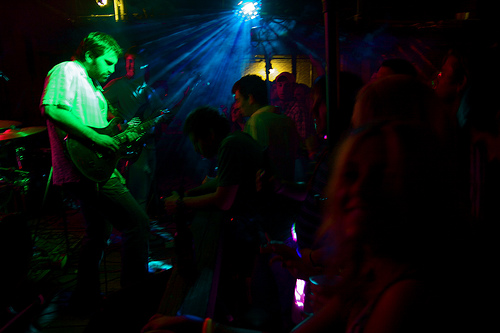 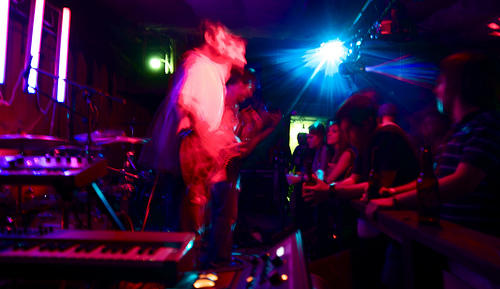 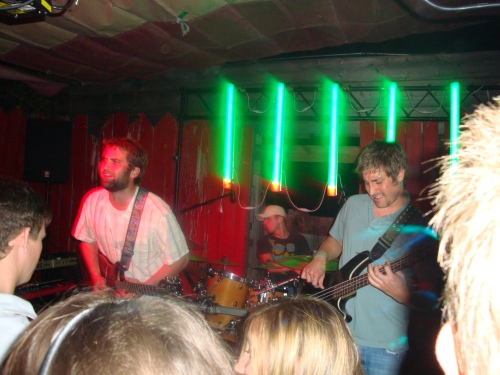 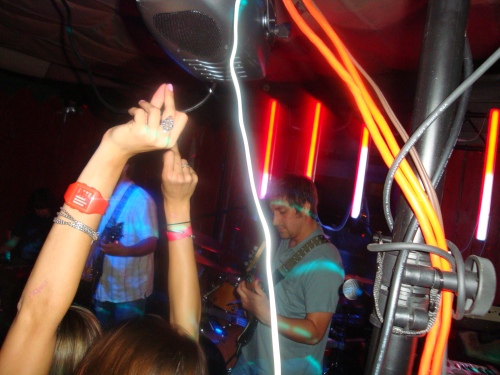 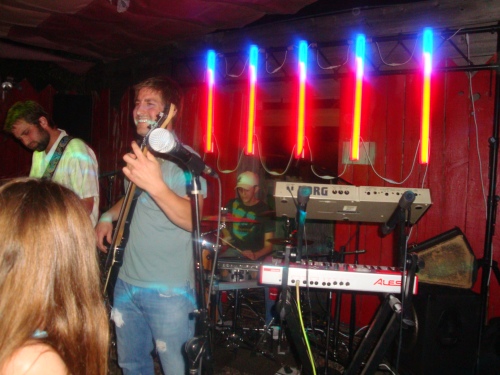 Posted on April 28, 2009 by silenceinarchitecture | 9 comments

I have been dreading writing anything about last week’s My Bloody Valentine concert, not because it was anything less than awe inspiring, but because I don’t have the verbal aptitude to do the experience any kind of justice.  What I’m about to say will come off as cosmic hyperbole to those not in attendance and bland understatement to those who were.

Loveless, as it was to thousands of others, was a touchstone in the development of my musical tastes.  Like The Velvet Underground & Nico, Daydream Nation, and Wowee Zowee, it was an album that completely shifted the way I heard music as a kid.  Having the opportunity to see MBV live was not something I ever considered to be within the realm of possibility.  Kevin Shields seemed like a man way too far lost in personal mythos and perfectionism to ever pick up where he left off with this band.  So when it was announced that MBV would be playing a handful of dates in the U.S., including Dallas, I was ecstatic.

While waiting for the show to start, a guy walked over to us and, with a look of clear anxiety, asked just how loud this thing was going to get.  We couldn’t tell him for sure, but any time the venue’s staff hands out complementary ear plugs at the door, it’s safe to assume you aren’t at a John Tesh concert.  The entire day I had a mixed feeling of genuine terror and fantastical elation.

To be completely honest, I was disappointed when I heard that there were going to be opening acts.  MBV are simply too monolithic to give anyone else a fair shot of not sucking by comparison.  Josh Pearson, formerly of Denton’s Lift to Experience, did a decent job, despite his obvious nervousness.  However, the choice to play a MBV cover was a bit of a head-scratcher.

In the spirit of charity, and since I like his band The Lilys, I’ll keep my thoughts about Kurt Heasely’s set to myself.

Anticipation was ratcheted to an unbelievable level as we waited (and waited) for MBV to take the stage.  The Velvet Underground’s narcotic “Ocean” evaporated into the onstage fog and would’ve been the perfect overture for MBV’s entrance, but instead we were forced to wait a few minutes longer.

As per their reputation, the group’s stage presence was entirely swallowed by their massive sound and eyes-on-the-floor mystique, being the very definition of anti-charismatic.  MBV have never been showmen/women; they are rock’s equivalent to the obelisk in 2001: A Space Odysey.

The sound at the beginning of the show was certainly rumbling, but as someone who has had his hearing damaged by Sonic Youth, it wasn’t quite to the notorious jet engine levels.  However, the decibel range slowly crept up throughout the night, and wearing ear plugs made it easier to distinguish the intricate melodies being frequency fucked onstage.  I was almost lulled into believing the infamous “Holocaust” section would be manageable.  Almost.

The Palladium is notorious for being one of the least sound-friendly large venues in Dallas, but the reportedly doubled P.A. system seemed to work magnificently.  For a band with such a brief but consistently brilliant discography (ok, maybe minus a few really early tracks), there were sure to be a couple songs sadly missing from the setlist, but the territory traversed was impeccable.  There were a few murmured complaints about the submerged vocals, but vocals are not the primary ingredient in this sonic stew, so I had no problem with that.  I was utterly awestruck by Colm Ó Cíosóig’s drum pummeling.  I was even more blown away to experience elements of the songs that are imperceptible when listening on a home system.  The sheer volume brought forth countless additional tonal layers. The hypnotic “Soon” could have spiraled into the abyss for an extra twenty minutes and I still would’ve been in a euphoric trance.

All of this lead up to “You Made Me Realize”, the climax for which we had been preparing ourselves.  I began to brace myself for the aural ambush around the corner.  All of the sudden I was hit with an indescribable wave of very real and very physical sound; we were in the belly of the beast.  This is where all words will fail to describe the truly surreal experience of the next fifteen minutes.  All sense of time simply evaporated as the crowd was thrust into an intensely hallucinogenic state of consciousness.  I traveled through all manner of feelings, beginning with a dopamine rush that eventually ceded to an almost oppressive fear that my body would simply be crushed by the force of the sounds enveloping us.  Then I think the entire crowd simply gave themselves over to catatonic bliss.  When the coda came crashing back in, it felt as if my body was lifted into the air, the same way your arms float skyward after pressing against a door frame for a few minutes.  After the song ended the entire crowd stood dumbstruck before any attempt was made to exit the venue.  For a few moments I wasn’t sure my legs still worked.

We stumbled into the night as zombies, our brains feasted upon by one of our planet’s most justifiably exalted rock bands.  None of us will ever be the same, and some of us will never hear the same.  We had just survived the greatest sound sculpture ever erected.

“To Here Knows When”

“You Made Me Realize”

From one of the greatest albums of all time, Tago Mago:

Posted in I Want My MTV, music

Chris Corsano is, easily, one of the most talented and innovative drummers on the planet.  He has worked with Six Organs of Admittance, Thurston Moore, Nels Cline, Jim O’Rourke, Jandek, Sunburned Hand of the Man, and even toured with Bjork.

If this video doesn’t make you doo-doo in your pants a little bit then you need to visit your proctologist immediately.

Posted in The Outer Reaches

All These Teepees – March 15

Posted on March 14, 2008 by silenceinarchitecture | 3 comments 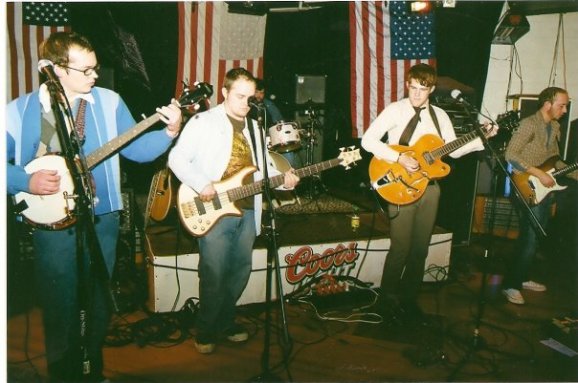 Image: All These Teepees

Local SINsations, All These Teepees, will be performing tomorrow night (March 15) at Ada’s legendary A.B.C. Sports Center.  This band is attractive, single, and ready to mingle!  If there is a world to be rocked, they will.

Opening up for the Teepees will be local dance hero DJ Tanner.  If there is a Full House, DJ Tanner will bring it down.

Must be of legal wino age to enter

Below is a picture of me (on the right, Coors in the aire) with DJ Tanner (mad muggin’ the camera): 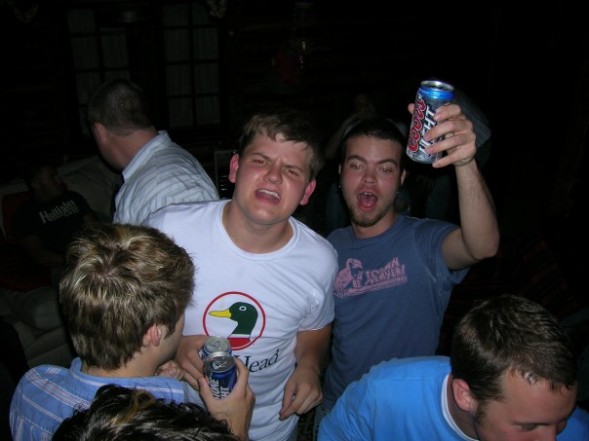