“Let me tell you right off, okay? I’m not a likeable guy.”

Finally, the film we’ve been quietly (or not so quietly) anticipating for the past year — Whatever Works, Woody Allen’s newest flick starring enthusiastically curbed Seinfeld creator Larry David. This marks Woody’s triumphant return to NYC and, from the looks of the trailer, a pretty by-the-numbers return to form:

Aside from Larry’s brief cameos in Radio Days and New York Stories, this marks the first major collaboration between two of my favorite Jews. If someone could have convinced Philip Roth to participate in the writing process, we’d be dealing with the the ultimate trifecta of psychoneurosis.

Posted on May 8, 2009 by silenceinarchitecture | 4 comments

Now America’s female attention seems to be focused on Twilight, and its’ lame-ass, skin-glowin’ “vampires”.  Fortunately, last year Sweden did their best to reclaim the horror and vampire genres from our apparently retarded American directors.  Let the Right One In was one of the best films released in 2008, and I sincerely believe it will someday join The Shining as a true horror classic.

Posted on April 30, 2009 by silenceinarchitecture | 3 comments

Since Bonnie ‘Prince’ Billy (Will Oldham) has a great new album out (Beware) and is on the current cover of my favorite music magazine (Wire), I decided to finally get around to watching this movie.  Well, plus there is that whole beef with Wes Anderson*.  Old Joy is a simple meditation on growing up and growing apart that I guarantee will make you book a camping trip as soon as possible.

*And he does have a point.  I agree that American cinema has a tendency to use pop music as a crutch that the great European directors don’t seem as likely to rely upon.  That’s a different post though.

Film: Is The “Crank” series the grind cinema for our time?

I’ve spent the past 4 1/2 years studying film. This past year, my hard work was rewarded with a framed piece of paper that solidifies this. And pretentious babbling on our own blog is going to be the only way I use said degree.

One thing I took away from my studies is a new-found appreciation for, what is largely know as, trash cinema. How did I spend my past two Saturday nights? Why, the director’s cut of The Toxic Avenger and re-mastered edition of Faster, Pussycat! Kill! Kill!, that’s how! Grind films are as horrific as they are entertaining to me. They present the kind of freedom/surrealism in cinema that Salvador Dali could appreciate despite the fact that someone like Frank Capra would be puking all over his shoes. Counter-culture films are how I like to see them.

Grind films were the most prevalent in the 70’s and 80’s, then kind of got washed away for a few years. There were some cases that popped up in the 90’s (I would argue that some of Lynch’s films, ie Lost Highway, share some similarities), but for the most part, it had nearly dissipated. Thus, when Crank first appeared in 2006, a dim light had be re-ignited. Hell, Crank was so extreme, it flared up like a fire in Backdraft.

Sexploitation, class abuse, racial stereotypes, and top it all off with a bit of the old ultra-violence. It was an immoral, cinematic car wreck that had me calling “Shotgun!” I loved it! A true escapist film. A sympathetic hitman who, when poisoned with “The Chinese Shit,” is forced to keep his adrenaline up in order to stay alive…or at least long enough to get his revenge! It was the kind of film that hasn’t been seen in cinemas for a long time.

Crank was filled with send ups for a generation fueled by video games, blood-thirsty media, energy drinks and Google. A grind film in every way possible. Last weekend saw the release of it’s hellbent brother, Crank: High Voltage. After surviving the events of the first film, Chev Chelios (Jason Statham) returns to hellish streets of Los Angeles. This time, someone’s taken his heart, and replaced it with an artificial one, and he has to keep it electrically charged until he can track down his original ticker. For the next 80+ minutes, the film somehow manages to offend, entertain, and disgust more than the original.

Crank has kicked opened a door that was on it’s way to being dead-bolted. So, the question is, “What comes next?” I’m hopeful that another entry in the series is on the way, but what about the rest of Hollywood? With studios like Lionsgate and Rogue, true genre pictures have a haven, but it’s not a very lucrative one. In the wake of a water-boarding administration, can Americans seek refuge in the likes of characters like Chev Chelios and The Toxic Avenger? Or are we afraid that Jack Bauer is sitting two rows behind us?

Posted in Film, Meaning of Life, Turn to the Left 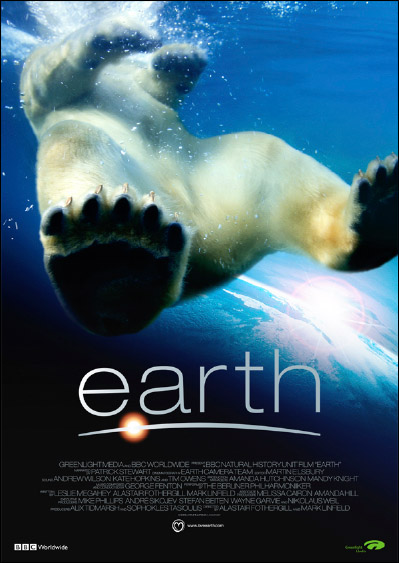 In addition to being a totally bodacious friend and fellow lover of killer music, my sister Lisa is also quickly becoming a very well-respected environmentalist blogger.  I admit that I haven’t been as steadfast in my adherence to living a green lifestyle, but I’m trying, and my sis has certainly set quite an example.  Because of her blog, Retro Housewife Goes Green, she is constantly sent free environmental products to test, and recently was even asked to participate in a conference call interview with the makers of Disneynature‘s first feature, Earth.  In addition, she was given a press pass to an advanced screening of the film and given permission to bring along one guest.  She asked me, so this past Wednesday we went to Bricktown in Oklahoma City to see the movie, and for an evening it almost felt like we were important people.  We got to move to the front of the line and were given first choice in seating.  I’m bragging about all this because it felt cool, so deal with it.

Earth is an award-winning nature documentary made by the BBC and released internationally in 2007.  In keeping with the general lagtime of the United States in regards to anything having to do with planetary preservation, it is finally seeing release here on April 22nd (Earth Day, natch).  It is a companion piece to possibly the greatest show ever to air on television (with apologies to The Wire), Planet Earth, and was directed by Alastair Fothergill and Mark Linfield.

The film utilizes a few select scenes from Planet Earth, but there is no reason to complain about the overlap since it is staggering to view those moments in high definition on a giant screen.  The movie is being marketed as a modern update on Walt Disney’s nature documentaries of the 1950s and is being billed as family friendly.  The majority of the audience watching with us was indeed comprised of young children, and they all seemed completely engrossed in the film.  However, adult audiences will find just as much to enjoy, and I urge everyone to see this in theaters while you have a chance. Oh, and the American version is narrated by Darth Vader rather than the British version’s Captain Picard.

The following “interview” took place in 1971, between the release of Bananas and Play It Again, Sam. It’s one of the best showcases of a young Woody Allen’s playfully sardonic bite, so much so that he basically turned it into a movie in 1980 (Stardust Memories, a personal favorite) — and it just might be the funniest 45 minutes on the internet:

Part 2/4: “What appears on the screen for the duration of the film is offensive to most people.”

Part 3/4: “I have no interest in meeting Roy Rogers, but I loved living with his horse.”

more about “Daily David: Octopus and Trout“, posted with vodpod

Posted in Film, The Outer Reaches

Silence in Architecture
Blog at WordPress.com.